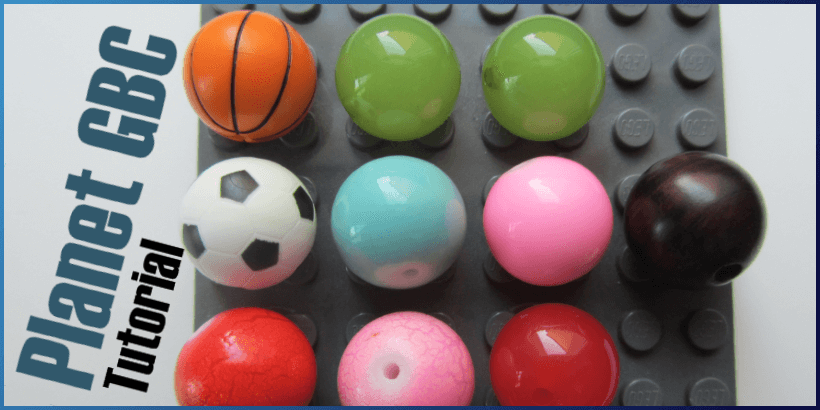 Follow Planet GBC first tutorial and get to know everything about the balls you’ll need for your GBC modules: soccer and basket balls description, how to buy them at the best price, explore cheaper options and more…

Apart from their mesmerizing mechanisms, what makes GBC modules so captivating? the Lego balls, of course!

Whoever wants to build and see a GBC module in action needs the basketballs or soccer balls that are so emblematic of Lego GBC. These two fellows have a name and an official reference… 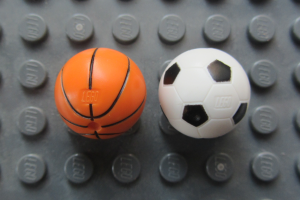 Planet GBC is going to explain you how to acquire them in this page.

That is unfortunate, but however not definitive. There is a very active Lego market to sell and buy used Lego parts (by the way, do not miss the page Order Bricks at the Best Price), giving you a new hope to acquire the so-desired balls.
But, because there is again a “but”, mind the fact that limited quantity brings limited offer, which leads to high pricing when it comes to high demand. So the more popular GBC is becoming, the higher the unitary price of a ball is (and will continue to be)…

Three philosophies are now in front of you:

➡ If you are a purist, then you will want to use only genuine official balls. I hope however that your purse is full in this case, as your only way of acquiring the balls is to order used parts on a Lego marketplace.

On average, a used ball for GBC costs between 1 and 3 Euros (/Dollars). As I can safely guess that you’ll want more than one or two balls, you can already figure out that being a purist is not for free..

On the other hand, I must say that sticking to genuine balls offers you certain valuable and sensible warranties. Several GBC modules’ mechanisms are so sensitive that a small difference in weight or dimension in the balls you are using (in comparison to genuine balls) can make the module jam or, even in some rare cases, break.
So it’s not only a matter of being state-of-the-art, but also a “secured” way of practicing GBC. 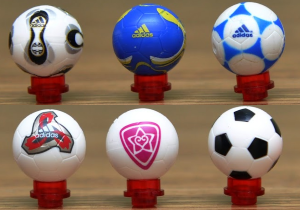 Balls with a special pattern offer then to the purists extra ways of sticking to standards, but with a bit of eccentricity (but at a higher price as you may have guessed).

➡ If you are a good deals hunter, then Planet GBC has tips for you. Since 2013, thanks to some Lego Friends set, Lego group restarted the production of Lego soccer balls. The balls have luckily the same weight and dimension as the legacy ones. They only differ in pattern. No more black and white pattern from the original soccer balls: new ones are simply orange or white. Also no more special basketball-like grooves on the balls, new balls are just lean in decoration, with standard soccer balls grooves. 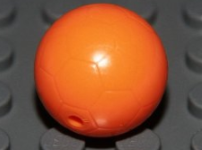 If they do not offer the standard look, the good surprise comes however from their price. As the balls are still produced at the moment, you can find both new and used parts, and you can get these genuine Lego balls at an affordable price.
Count between 0,5 and 1 Euros (/Dollars) per ball, which makes them 2 to 3 times less expensive than the original ones.
So it is an excellent compromise quality/price if you are ready to do a cross on the standard pattern (uniform color making them a tiny bit less sexy).

You can order these balls:
– on Bricklink
– on Lego Customer service page (after having populated the quick survey, select “Buy Bricks” and enter 72824 in “Element/Design number” entry field)

➡ If you are a discount hunter, you may be looking for some cheap alternatives to the expensive Lego balls. There is room for this and Planet GBC will try to list them for you. But let’s be clear however, not using the official Lego balls will expose your modules to a higher likeliness of behaving differently and unexpectedly.

The first alternative can be to use glass marbles with a diameter of 14mm. This can for instance be seen on some videos from GBC cuts like this one. If this option can make some of your modules work, the higher weight of the marbles and their fragile constitution will for sure prevent you from utilizing some GBC mechanisms (due to a different motion physics): forget about high ball drops, throws or toggles.

There are plenty of locations where you can order glass marbles. One of them randomly found on the web: Moon Marble (marbles not tested)

In France, you can buy colorful 14mm beads for your GBC modules in Cultura shops

The second alternative is the usage of 14mm silicone beads. You can find some of them on the web or in some specialized shops, sometimes at a cheap price.
Thanks to the silicone they are made of, these beads can be quite close in weight from the standard Lego balls.
The challenge is however to find some beads having a diameter exactly at 14mm and ones having narrow holes, as too big holes are flattening some side of beads, strongly impacting their rolling capability (leading sometimes to unexpected behaviors in GBC modules).

But the (from far) best alternative, cheap and fitting our constraints, is….

You want a lot of balls for your GBC modules, you want them to be reliable but you don’t want to spend tons of money for them. The “Quercetti Marbles Refill 100 pieces” is there for you! You can see them in action for instance on videos from Frank Meus like this one or this one. 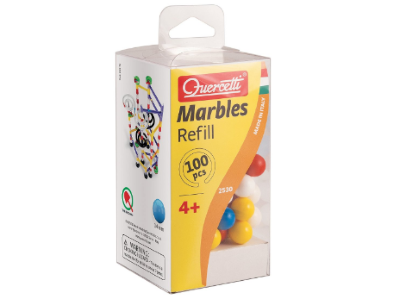 These balls have roughly the same size (14mm) as the genuine soccer and basket balls, a weight that is approximately the same but the main (and big) difference is their price! For less than 10 Euros/Dollars, you can get 100 of them, making them 10 to 20 times less expensive than genuine balls. I’ve ordered myself 3 buckets of these balls and I must say they are indeed the best alternative I’ve found so far.

The best place to order them is so far on www.amazon.fr. A simple search with key word “Quercetti Marbles Refill 100 pieces” on this website will route you to a merchant selling them.

If you do have other tips to order GBC balls or substitutes at the best price, do not hesitate to leave a comment to share them with planet GBC community !