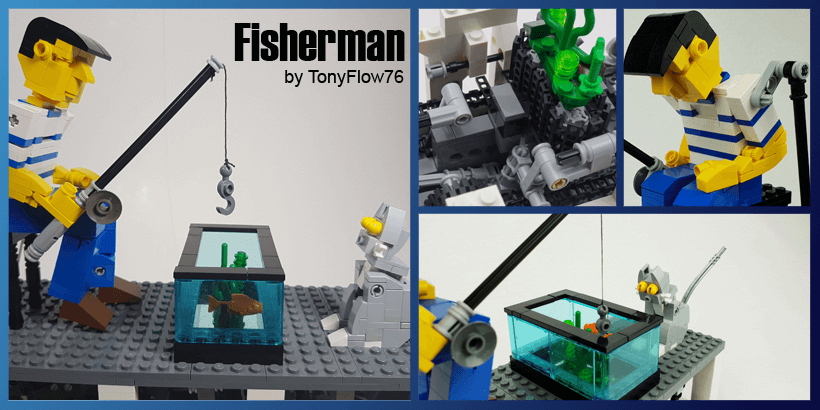 Fisherman is a LEGO automaton from TonyFlow76 representing a cosy little scene featuring a fisherman, his cat and an uncatchable fish. Numerous parts from this LEGO MOC are animated: the tail of the cat, the foot of the man, the head of both characters and also the fish in the aquarium. All parts are animated by a single crank, synchronized in perfect harmony in order to give life to this irresistible scene, full of poetry. TonyFlow76, designer from this MOC, found his inspiration to create this LEGO Automaton in the early style of automata pioneers Keith Newstead and Paul Spooner. The idea came easy to him. But, because he wanted the action to take as long as possible (the character actually taps his foot 19 times before lifting his arm), the build took quite some time and effort. Eventually he hit upon the idea of chain link sequencing, which worked out nicely: One chain moves the foot and tail, the other tilts the heads and arm.This automaton has reached more 1 millions views through several videos on YouTube, and we can bet that his charm will not leave you indifferent. Happy fishing!

A special guest (Foxy) is inviting himself to this second video of Fisherman: